The Herald has a lukewarm review of the current production, praising mainly those elements intrinsic to the show itself rather than any particular staging. You can read the whole piece here - http://www.dailyherald.com/article/20141121/entlife/141129955/ - but here are the highlights as I saw them:

"Annie" is showing her age. It's not that the 1977 Tony Award-winning musical hasn't retained its spunk. But few audience members for this kid-pleasing show -- now in a new non-Equity national tour playing Chicago's Cadillac Palace Theatre -- have any memory of the musical's Great Drepression-era setting. So the script's name-dropping of historical figures like Supreme Court Justice Louis Brandeis or tennis champion Don Budge don't generate big collective laughs anymore. This probably helps to explain why the creators of the forthcoming "Annie" film adaptation starring Jamie Foxx and Quvenzhané Wallis have junked the musical's original 1933 setting in favor of contemporary New York. But I suspect the time switch will be a big mistake. "Annie" is still regarded as a return to form of traditional Broadway book musicals, and its Depression setting is intrinsically tied to its inspiration of Harold Gray's newspaper comic strip "Little Orphan Annie." ... My main issues have to do with some of the central casting and Charnin's direction. Lines uttered by the child actors lack the necessary feel of spontaneity, as do their movements -- making them seem almost mechanical at times. That is sadly true of Issie Swickle, who sometimes plays the title orphan like she's just going through the motions.

Lynn Andrews brings a welcome big and brassy presence with a booming voice as the embittered orphanage matron Miss Hannigan, a role she previously played in the 30th anniversary non-Equity "Annie" tour. Yet Andrews' comic timing still isn't as finely modulated as it could be, so many potential laughs are missed.

The big production number "N.Y.C." is also a letdown, since Charnin has switched its typically hectic Times Square setting in favor of an amiable mosey through Central Park. It comes off like a cost-cutting measure since it meant that costume designer Suzy Benzinger didn't have to create a separate set of outfits for just one number.

But even with these drawbacks, there's still much to recommend this "Annie." Charnin has assembled a strong supporting ensemble. There's fine gruff work from Gilgamesh Taggett as a bulldogish Oliver Warbucks, playing nicely off the lovely and refined Ashley Edler as sharp secretary Grace Farrell.

This touring "Annie" is also a visual delight thanks to set designer Beowulf Boritt's beautiful mix of traditional flat backdrops and gritty dimensional scenery (particularly in the rundown orphanage).

Quite aside from the merits of this show, can I just say how cool is it that not only does it have a lead named Gilgamesh, but the set designer's name is Beowulf? I sense a theme here...

It's quite different from the tribune's review...

Is there a way you can post this review? The site won

Huh, it didn't do that when I posted this discussion. Maybe the content is only free the day of publication or something, but I can't access it now, either. Sorry - had I known, I would've posted the whole thing.

So it's Thanksgiving week — and family and "Annie" are in town. Whaddya wanna know? I'd venture it's whether the latest bus-and-truck "Annie" delivers the full "Annie" experience. 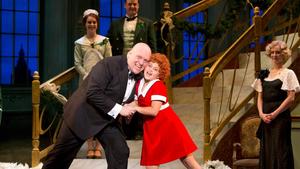 In my book, that would include ample, traditional (nondigital) settings, a red-headed gal (do not mess with the hair color) with enough oomph to belt out "Tomorrow" with the requisite excitement, a Daddy Warbucks with a bald pate, beating heart and fulsome baritone, a funny and slightly scary Miss Hannigan (the tone there is crucial), enough cute orphans to fill a bread line and a hearty pooch who oozes unconditional love. The dog should be from a shelter and should not be a stuck-up stage doggy who otherwise resides in some descendant of the Warbucks kennels. The show must include a substantial live orchestra. It does not require the ministrations of either a minimalist or revisionist director.

An "Annie" must have the excitement and glamour of the holiday night out: A girl should be able to dress up (like Annie, by all means) in a red coat and faux fur without feeling like she's stuck in a prom dress at Chuck E. Cheese's. The windows for these experiences in a kid's — and especially a parent's — life are brief. And thus precious. Five seconds from now, she'll be scoffing at the very notion and craving Lorde. The "Annie" moment is too brief and precious for shattered expectations.

Well, does this touring "Annie" have all that? Let me drag out the suspense a moment with a disclaimer, old school and new: "Tribune Media owns the 'Little Orphan Annie' and 'Annie' trademarks and copyrights. Tribune Content Agency has licensed them for use in this production."

We're back. The answer is yes.

The last time I thought a non-Equity tour was the qualitative equal of a Broadway tour actually populated by Broadway-experienced, union actors was in 2010 at the Auditorium Theatre. Guess what show that was? "Annie." A big factor, frankly, is that kids drive the show. And that the people who put this show together know what they are doing, and have done for decades.

This is a new production — the author and director Martin Charnin's umpteenth such tour. Some of Charnin's early Annies are staring Medicare in the face now. But he keeps on trucking, guarding the flame, making sure nobody cuts the overture, or the entr'act, or does the thing without the wig and the dress that recall the cartoon, as drawn by Harold Gray. (A cartoonist of guess which very fine newspaper?)

There was a revival of "Annie" on Broadway two years ago, and you'd have thought that quite startling production then would tour. Well, it was no good, and there are no tears from me for that production being replaced with the regular old "Annie," as helmed by Charnin, the fellow who penned "I just stick out my chin, and grin, and say ..." He never looked back and now does what the heck he wants.

That 2010 tour actually had the same Miss Hannigan in the very capable and funny Lynn Andrews. Unlike most Miss Hannigans, and I've seen more than enough for several lifetimes, Andrews intuits that she has to be bad enough to sustain the narrative, sure, but that it's not her name on the marquee. We do not need to see a method-acting portrait of a woman who hit the bottle and lost her soul, tempting as that can be. We do not care. We are here to see "Annie" triumph.

Last time Andrews (whose formidable vocal range allows for a touch of the Harvey Fierstein) was in town, I complained she was too young for the role. Guess what? Four years have gone by and that problem has gone away. She's just fine now. Issie Swickle, who plays the title role, is a worthy heir to the long line of Annies. In fact, the young Swickle and Gilgamesh Taggett (this cast has some names) had me quite verklempt in the last scene between Daddy Warbucks and his potential adoptee, prior to the pooch in the box and all being well with the world. Taggett is a generous actor and a decent singer.

Sometimes the kids move more quickly than Beowulf Boritt's set did on Tuesday night, and I think Big Daddy could spring for a bigger staff and pay 'em a union wage, but then I'm a realist and I'm willing to wait for scenery in such a show, lest they show up without it next time.

Oh, and one last thing. This show has the best Molly I've ever seen in Lilly Mae Stewart. There's a young woman who knows how to make a role her own. Watch out Annie, Molly's a-coming.

Sydney Shuck should have been Annie...she may be a tiny bit taller than what Charnin likes, but he can belt very well and has that scrappy kid look.